A Positive Leader On and Off the Court 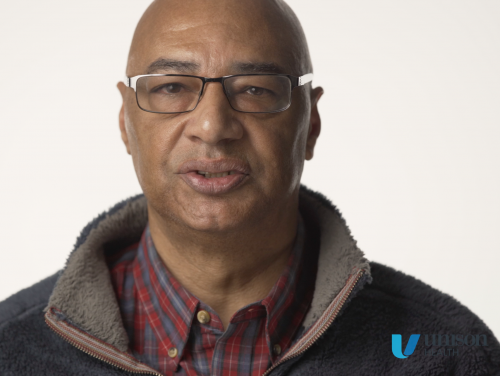 For Truman Claytor, a Licensed Chemical Dependency Counselor with Unison Health, the NCAA March Madness will always have a special place in his heart, even when cancelled.  He was a member of the University of Kentucky basketball team that won the championship in 1978.

It was just one of many honors in his life, being on an NCAA Championship Team as well as being inducted into the City League Hall of Fame in 1991 and the African American Project’s Sports Legends Hall of Fame in 2018.

Now on June 20, 2020, Truman will be inducted into the Ohio High School Athletic Association (OHSAA) Hall of Fame as a referee for outstanding officiating and significant contributions on interscholastic officiating in Ohio.

He shares his life lessons with the young people he works with at Unison Health as he encourages them to be positive leaders.

Dreams of a Young Boy

As a young boy growing up, he had three channels on TV not the vivid sports scene we have today.  UCLA always won the big NCAA tournament basketball game.  So it was exciting for this young player from Scott High School to later go on to play for the University of Kentucky and win the NCAA final game against Duke University.

Truman was recently interviewed by EPSN for a special documentary they are putting together on that historic game for next year, tentatively titled, “Win or Else.”

In 1978, the game didn’t seem iconic to him.  But five years later at a reunion when the team was introduced to the 24,000 fans, “I was shaking.  All, I was thinking about when I walked to the center of the court was don’t fall down.”

From Player to Referee

In 1992, Truman thought about coaching.  A friend referred him to a coaching job at Macomber High School.  He got the job, but the school closed.  He thought about refereeing.

“It kept me around the game so I would see the coaches and players,” according to Truman.

That love of the game and being around the coaches and players, has kept him an active referee for 27 years.

Truman has had the privilege of officiating both Division II and III College and high school games.  Although he quit doing college games in 2004, he has continued to be an intricate part of Ohio high school basketball.

One of his biggest games was the State Finals Division II in 2017 between Trotwood-Madison High School and LeBron James’ alma mater St. Vincent-St. Mary’s.  Both were extremely good teams.

According to Truman, refereeing has changed the last ten years, because of fan behavior.  “There is so much more security because of fan violence.  Fifty percent of the crowd is against you, and the other 50% is for you.”

“I always say if no one recognizes who the referees are after the game, we did a great job."

One of His Biggest Achievements

“I think as a professional referee, I had to know the rules and think not as a player but in a special way.  I had to learn when contact was an actual foal.  I needed to be at the right angle to see the play at all times.”

“I really struggled the first two years.  Then in the third and fourth year, I became more comfortable.  Then they changed the rules and we went from two officials to three officials on the court.  I had to learn the rotation all over again.”

To do that he went to referee camp, “I had to put the time in to be a better basketball official.”

You Have To Put the Time In

This is the kind of lesson he shares with young people in his work as a Licensed Chemical Dependency Counselor with Unison Health for young adults dealing with drug and alcohol dependency.

Truman helps young people put in his or her time to motivate a decision and commitment to change.  He encourages young people to look at themselves, understand what it takes to give up a drug lifestyle and commit to making changes to attain success.

His Passion is Young People

Truman has always wanted to work with young people.  His thought was to be a teacher and basketball coach.  But a friend suggested, he apply as a counselor for chemical dependency.  And that is where is passion has been for almost 30 years.

“I experience rewards every day, when I see young people get off drugs, get their high school diploma, go on to college, or a learn a trade skill.”

He shares his background with each new young person he meets through this work. Truman explains, “It helps break down the walls.”

“Some of them look at me as a father figure, others as a mentor.  Once I establish a relationship, it helps me push through their door.  Some are kicking and bucking all the way before they open up,” he said.

He reminds them, “This is your life.  You have to make the decisions.”

Committing to Change Through The Seven Challenges

One of the ways he does that is through The Seven Challenges.  “The program challenges young people to make his or her own changes and meets them where they are.”

One of the ways Truman does this is by encouraging journaling.  “They have a choice to make it here.  I tell them, ‘I can’t tell you what to do.’”

He urges them to set goals whether it is to get off probation, get back in school, make amends to start playing sports again, etc.

Being a Positive Leader

One of the biggest lessons he instills is getting away from negativity and being a leader to resist peer pressure.

“You have to get away from negativity and be more of a leader than a follower.  Turn your life away from being a follower.”

These lessons Truman lives every day by being positive and by being a leader both on and off the court.

19.1% of the adult population suffer from some type of mental illness.